NINE LANCE GAMMA COUPÉ ON DISPLAY AT MAUTO UNTIL 24 OCTOBER 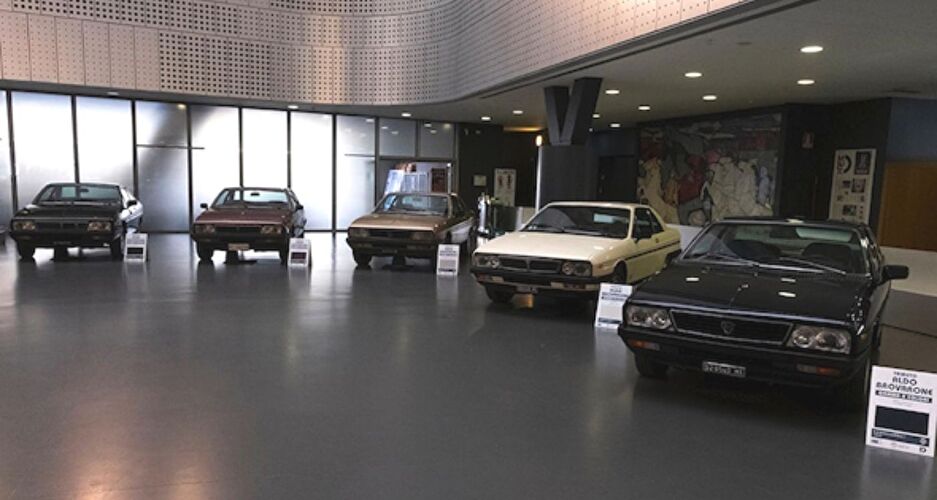 The evening at the Automobile Museum in honour of Aldo Brovarone began with a warm and heartfelt round of applause. It became an intimate and emotional collection of memories from those who had the good fortune to know the Maestro and wanted to share episodes and anecdotes with others.

A celebration that was the corollary of a day in which Aldo Brovarone was celebrated by journalists who, driving Lancia Gamma Coupés from Andrea Levy's 777 Collection, set off on a journey through time, starting from the headquarters of the Torino Heritage association in Sant'Ambrogio, and stopping in the centre of Rivoli before setting off again and arriving at Mauto. It was at Mauto that the nine Lancia Gamma Coupés, each in one of the colour combinations envisaged by the original model, were placed on display for the public to admire until 24 October and to get to know, through their lines and colours, the art created by Maestro Brovarone.

Art was not the only thing the guests on stage spoke about during the evening, stylists, friends, former colleagues and journalists who drew a richly nuanced portrait of Aldo Brovarone: an unconscious genius, a lover of his work and passionate, an elegant stylist who shared his knowledge, generous and amusing.

On stage, guided by Mariella Mengozzi, director of Mauto, and Andrea Levy, owner of Collezione 777, were key figures from the world's car design elite: Paolo Pininfarina, who recalled that Aldo Brovarone was the first person he met and worked with on the first day of his internship in Cambiano, and then Enrico Fumia, Leonardo Fioravanti, Lorenzo Ramaciotti, Diego Ottina, Fabio Filippini, Giancarlo Perini, Ercole Spada, and Paolo Martin, who spoke by telephone. Brovarone's stories also came from Giuliano Silli, the Maestro's biographer, Enrico Masala, the manager in charge of the Lancia brand during the years of the Lancia Gamma Coupé, Daniela Fresc who edited a monograph for Auto d'Epoca, and collectors Sylvie and Urs Jacob, who restored a Cisitalia with Brovarone, Paolo Falcinelli and Toni Cestarollo, President and Vice-President of Lancia Gamma Club, and Giuseppe Gremo, Secretary of the Air Force, who spoke on behalf of a large contingent attending the evening, telling of the Maestro's second passion, aeronautical design.

His nephew Cesare Brovarone shared private memories, together with Alfredo Stola, who collaborated with Brovarone on the creation of prototypes including the Stola Dedica and the Ruf RKSpyder Studiotorino, present thanks to Stola in a car display for the celebration, at the Museum, alongside the Dino 246 gts and the 1974 Lancia Beta Spider. Completing the temporary exhibition for the Aldo Brovarone Tribute was a Peugeot 504 Coupé owned by Guido Braida, a collector and member of the Peugeot Historical Register.

It was a successful celebration, one that moved people, as Andrea Levy, owner of the nine Lancia Gamma Coupés on display at the Automobile Museum until 24 October, confirms: "We wanted to remember and celebrate Aldo Brovarone with the affection and passion that he shared with all of us over the years: it was great to travel with all the Lancia Gamma Coupés, special to let journalists drive them and bring them to the public and Aldo's friends, in an evening full of memories. Aldo would have been happy". Translated with www.DeepL.com/Translator (free version)