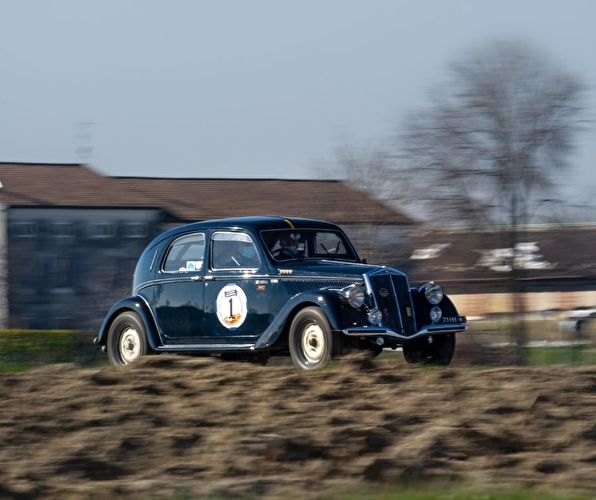 A sunny even if cold Sunday day, has accompanied on February 14th the first race of the National Regularity Trophy, "Il Colline dei Gonzaga", with seventy-four crews at the start of which more than forty specifically for the Trophy. We remind that this was established by Aci Sport a few years ago to encourage the participation of drivers who are usually preceded by the Top drivers and the A's and therefore fail to occupy the upper parts of the podiums. This year, due to the difficulty of participation created by the pandemic in the Italian Championship races last year, many of the usual known, however, have found themselves among the unclassified drivers and have also used the race Tnr to quickly access the positions they deserve in the national ranking Aci Sport. The organisation, managed by Promo Car Service, had to modify the initial programme in order to guarantee the respect of the Aci Sport protocol against the pandemic, finding in the wide spaces of the Park Hotel of Casalmoro the ideal environment. The race was also used by 12 top drivers and 16 top A, to train for the next Cireas trials. A race with 44 timed trials, two average trials (with three readings each) in the Mantuan plain and with some uphill passages, characterised the route. Trials with visible trolleys to facilitate the many neophytes present.

Absolute, great comeback for the Italian champions
The overall victory went to the reigning Italian champions Lorenzo and Mario Turelli from Brescia, son and father, who, after having missed the opening race of the Cireas, took advantage of the proposal on the calendar to try the Lancia Aprilia. With the same penalties, but second for the worst result on the first test resulted discriminating, where the Turelli scored zero penalties the duo formed by Mauro Bonfante-Gerardo Nardiello, with the Fiat 1100 /103. The two Milanese held their own against the Italian champions for the entire race, showing that they haven't lost the sparkle of some time ago. Behind them, the brilliant duo from Brescia, Angelo Tobia Seneci-Emanuele Bonera, with the Innocenti Mini Cooper, who confirmed to have started very well in the current season. Behind them, the Roberto Crugnola-Marco Vida from Varese with the Fiat 508 C. The first five positions are closed by the expert Armando Fontana paired with Alfonso Tumbarello and the trusty A112 Abarth. In the second part of the first ten competitors the classification shows the duo Andrea Belometti- Caterina Vagliani with Fiat 508, Matteo and Martina Belotti, father and daughter again with Fiat 508, Andrea Malucelli - Monica Bernuzzi with Fiat Duna, Massimo Cecchi-Emma Graziani with Innocenti Cooper Mk1 and Giovanni Gualtieri-Mario Perri with Autobianchi A112.

NATIONAL REGULARITY TROPHY, Bonfante on all
The overall classification of the Trofeo Nazionale Regolarità after the already mentioned Bonfante Belotti and Cecchi we find in the top ten, instead of Top drivers and Diver A who cannot participate and are transparent in the classification : Massimo Politi-Pierluigi Ruggeri with Innocenti Mini Cooper and Classic Team colours; Michele Bellini-Leonardo Marini with Fiat 1100; Fabrizio Bellini-Luca Bordogna with Triumph Tr3A; Nicola Bonacini-Giorgi o Bolla with similar car; Domenico Gianotti-Antonella Zanotti with Porsche AT1; Riccardo Guggiana-Roberto Rossoni with Mg B Spider and Alberto Sacco-Sario Bonanno with Porsche 356 SC.
Women, constancy rewards Rossella Torri and Giovanna Ruffini
The coveted ladies cup, saw the victory of Rossella Torri- Giovanna Ruffini from Brescia, with the Innocenti Mini Cooper that with a good and constant race confirmed the good things done in the opening race of the Cireas the week before. Their efforts were rewarded by the first heavy points for the ladies' cup in the Tnr. Behind them, Maria Luisa Chillemi-Gabriella Scarioni with the Austin Mini. It should be noted that the top Milanese driver navigated her teammate, as well as entrusting her with her car, due to a problem with the A112 of the driver. This shows the interest created by the Trofeo Nazionale Regolarità. In third place Annalisa Bellante-Alessandra Ferrari with the Porsche 356 C, who had a few "too many" problems in the passage on the pressure switches and finished in last place overall.

UNDER 30, Bellini, a surname...a guarantee
The Under 30 classification went to Michele Bellini-Leonardo Marini with the Fiat 1100 that preceded Roberto Parisi - Marco Rossi that took for the first time the Fiat 131 with an excellent final average, confirming themselves as top drivers.

racing teams, monopoly from Brescia
Among the entered teams, victory for Emmebi 70 of Lumezzane, thanks to the result of Bonfante-Nardiello, Domenico Gianotti-Antonella Zanotti with Porsche AT 1 and Alberto Sacco-Dario Bonanno, with Porsche 356. The other steps of the podium went to Brescia Corse and Amams Tazio Nuvolari.

ABSOLUTE GROUPS AND NATIONAL TROPHY
The second grouping among the 7 registered cars built between 1931 and 1946 behind Turelli and Crugnola saw Belometti on the podium. For the TNR classification the victory went to the two Belotti in front of Stefano Valente navigated by top driver Alberto Aliverti.

In the third group with 22 cars after Bonfante-Nardiello we find the top driver Alessandro Gamberini with Guido Ceccardi on Fiat 1100/103, who preceded the young Bellini-Marini with the colours of Brescia Corse, Luciano Lui-Polo Pizzi also with Fiat 1100/103 followed by Alfonso Facchini-Luigia Olivetti with MgA. For the National Trophy after Bonfante-Nardiello, Bellini-Marini we find Michele Bellini with Luca Bordogna on Triumph Tr3A. To underline the excellent performance of Nicola Bonacini-Giorgio Bolla, fourth with the Triumph Tr3, who preceded Gianotti-Zanotti.

The fourth group among the five starters, saw the success of Sergio Mazzoleni-Silvia Gotti with the Porsche 356 Sc and the colours of the Club Orobico Bergamo Corse. Behind them, the excellent Riccardo Guggiana, who is returning to the good results of previous years, with the MG Spider for the Franciacorta Motori team and Matteo and Arianna Lozza with the Innocenti Austin. In the TNR classification, after Guggiana and Lozza, third place went to Domenica Tirelli-Giorgio Gazza in the beautiful Alfa Romeo Giulia SS for the Amams Tazio Nuvolari team.

The fifth group saw Cecchi-Graziani excel among the 15 participants, ahead of Massimo Politi-Pierluigi Ruggeri with the Innocenti Mini Cooper and the colours of the Classic Team and Giovanni Prendelli-Loredana Pasotti of Emmebi 70 with the beautiful and aggressive Lancia Fulvia HF. For the TNR the fourth grouping went to Cecchi, followed by Politi and Umberto Ferrari-Guido Urbini with the sporty Lotus Elan that preceded Simone Rossi-Anna Melegari with the Lancia Fulvia and Turri-Ruffini.

The sixth grouping with 12 crews present saw the victory of Seneci-Bonera, followed by Fontana-Tumbarello, Ezio and Andrea Ronzoni, father and son, with the A 112 Abarth, Paradisi and Daniele and Giorgo Bossi of Club Orobico BG Corse on Lancia Fulvia Coupe. In the TNR the group was won by Valerio Bocelli, sports director of Brescia Corse, navigated by the talented and often driver, Elena Magionami with the Innoncenti Mini Cooper ahead of Maurizio Riboni-Carla Spadini with the Lancia Fulvia and the colours of the 3 T team of Cremona, while the third step of the podium of Ruggero Ghidini-Enrica Ghisla with the Alfa Roemo 2000 GTV.

Among the four starters of the seventh group, the victory went to the strong Massimo Dalleolle-Marco Magnai with A 112 Abarth followed by the top driver Paolo Vincenzi navigated by his brother Vincenzo always with A112 and the duo Andrea Paradisi-Mateo Guerci with Fiat 127. For the group classification in the TNR, out the first two, after Paradisi at the second place we find Marco Varosio-Marianna Cagliari with the Lancia Beta Montecarlo and the colours of the Scuderia del Grifone.

The eighth grouping with 4 competitors behind Gualtieri are classified the excellent Dario Converso with Federica Ameglio, on A112 in front of Chillemi-Scarioni and Giovanni Soldo- Sabrina Messina with the unusual Panda 4x4. In the TNR classification first and second place for Chillemi and Soldo.

Ninth and last group won by Andrea Malucelli and Monica Bernuzzi with the Fiat Duna and the colours of Franciacorta Motori, with behind Marco Piccirillo-Adelina Porretti with the Mazda MX5, who won alone in the group for the TNR.

As the rules of the National Trophy dictate, there is also a drivers' classification, with the exclusion of top drivers and A drivers. The Driver B category saw the podium composed of Nicola Bonacini, Maurizio Riboni and Stefano Valente.

Category C saw the victory of Soldo who preceded Alessandro and Andrea Senni in a Lancia Fulvia Zagato and the colours of Emmebi 70.

In the medium regularity trials, which Aci Sport wants to promote more and more, the overall classification was the prerogative of Ghidini-Ghisla, ahead of Cesare and Francesca Ruggeri (winner of the Ladies' Cup at the 2020 Mille Miglia as navigator together with Silvia Marini), father and daughter with the Lancia Augusta. The third step of the podium went to Valente-Aliverti. In the top ten we also find Belotti, Guggiana, Soldo, Lozza, Lui, Prandelli and the duo formed by Marco Borea-Aldo Gadioli on the beautiful 1961 Lancia Zagato Appia Sport.

For the National Trophy, the average race that repeats the overall one, excluding the A drivers Ruggeri, Lui, Prandelli, sees entering the top ten Michele Bellini, in eighth place, Attilio Monici-Maurzio Buttini with the Porsche Targa for the colours of Amams Tazio Nuvolari, and Marco Piccirillo good tenth.