The Great Events champion navigated by Luongo on A112 author of a great performance. All Sicilian podium with Accardo-Becchina on Fiat 1100 and Commare-Trombetta again on 112. 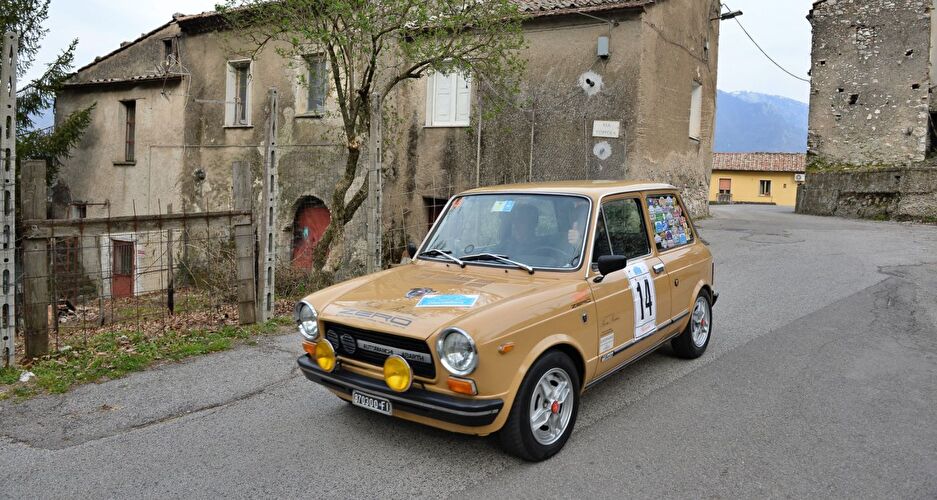 Mario Passanante, navigated by Mario Ricaldo Luongo in an Autobianchi A112 in Category RC4 (© Photo DEIAS)

All-Sicilian podium at the 17th Millecurve, third round of the Italian Historic Car Regularity Championship CIREAS staged this weekend in Avellino and won by Italian Champion Major Events 2021 Mario Passanante, navigated by Mario Ricaldo Luongo on Autobianchi A112 RC4 category. The strong driver of Campobello di Mazara, standard bearer of Franciacorta Motori was the author of an impressive progression, having got the better of his fellow citizen Angelo Accardo, navigated by the experienced Filippo Becchina on Fiat 1100/103. Between the two a gap of about 30 penalty points despite the coefficient of the car of Accardo, certainly more favorable. To complete the podium still an expert Sicilian crew of Campobello school, or rather the one composed by Francesco Commare and Roberta Trombetta still on A112 of the Nettuno team. Commare is dominating the Power Stage with 0.67 average.

"It was a very intense and demanding race," declared Passanante. Closing such a technical and sometimes difficult race with night trials at an average of 1.7 was really a great satisfaction. I had been absent from the Cireas for some time and I didn't expect to be able to pull off such a high level performance that left me surprised too. Obviously I am not as rusty as I feared. I have rediscovered my old 112 thanks to the new owner of this car which had given me so much satisfaction in the past. We have also obtained a record as a team that fills the whole team with pride".

"Avellino is in our opinion - commented Commare - one of the best races in CIREAS calendar that would deserve an even more massive number of competitors, not so much for the points of the Girone Sud as for the quality of the route and hospitality. Our race was very positive, we made a good average, I paid only a couple of mistakes. We fought a lot with Accardo for second place and finished with a gap of just 15 penalties. We are very happy".

First in the RC1 category and fourth overall was the crew formed by Andrea Belometti navigated by Doriano Vavassori on the splendid 1929 Lancia Lambda Spid of Brescia Corse. Fifth overall and first in RC2 was Taranto driver Fabio Loperfido with Corrado Corneliani of Classic Team in a '38 Lancia Aprilia 1350. Sixth overall and third step of the podium of RC4 for Nicola Barcella and Michele Vecchi always on A112 of Tazio Nuvolari. Second in RC3 1600 and seventh overall are the experts Armando Fontana and Silvia Grossi on their trusty 1966 Lancia Fulvia Coupe. First in RC4 over 2000 cc for Valerio Rimondi and Liana Fava on Porsche 911 S Targa. Completing the Top Ten are Andrea Malucelli with Monica Bernuzzi on Fiat Duna and Claudio Lastri and Valter Pantan on 1982 Alfa Romeo Giulietta of Kinzica. The next appointment of the CIREAS will be at the foot of Mount Titano for the San Marino Revival scheduled on 23 and 24 April.