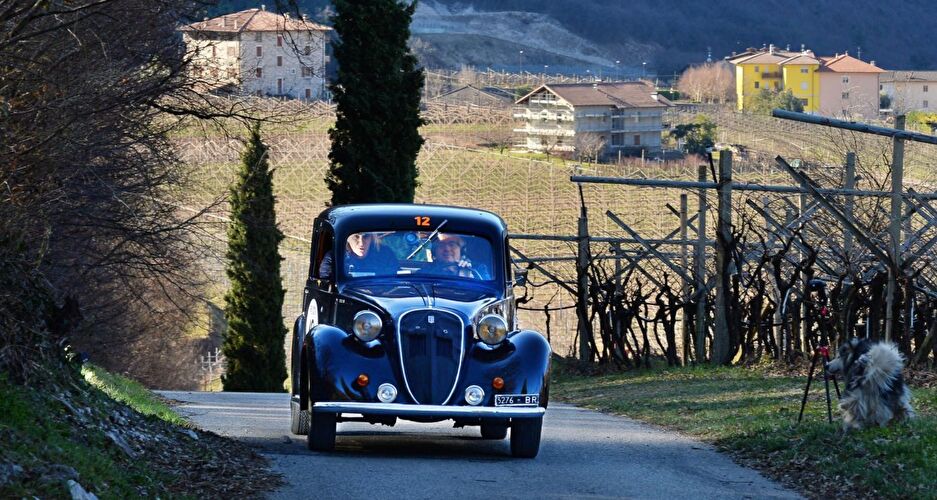 Just two years after their last success, Guido Barcella and Ombretta Ghidotti from Bergamo in a 1938 Fiat 508C won again the "Coppa Città della Pace", the second round of the Italian regularity championship for historic cars, by 25.29 penalties over Andrea Vesco and Fabio Salvinelli, competing in a 1936 Fiat 508 S Balilla Sport, and 27.23 over last year's winners Luca Patron and Steve Clark in a 1933 MG L Magna. Eight of the cars in the top ten places were pre-war. Guido Barcella thus joins the club of the event's multiple winners, which includes five other regularity aces such as Lurani, Fortin (three wins each), Fontana, Vesco and Margiotta (two each).
Yesterday, 96 crews battled it out on the roads of Vallagarina from 9 am to 5 pm in the 60 time trials along the 178.3 kilometres of the 178.3 km course, which as always is very selective and much appreciated by top drivers, as it should be for a Cireas event. Barcella and Ghidotti quickly took the lead in the classification and did not let go, with just four out of 60 tests closed with penalties greater than 5 and with eight "zeros" (perfect test) to their credit, three of which placed in the last six, not to leave anything to chance. It is worth noting that the two drivers from Bergamo, who scored 202.86 penalties, would have won even if the ranking had been drawn up without multiplication coefficients, which favour older cars.

The ace Andrea Vesco from Brescia and the navigator Fabio Salvinelli have disputed a high-level test, but they have finally paid duty especially in the final, between Crosano and Ala, having to devote themselves to the defense of the second place, which came very close to last year's winners Luca Patron, Vicenza, with Steve Clark, so that at the end the difference between the two pairs was just 1.94 penalties, a trifle. Also important for the ranking of the Italian championship was the fourth place snatched by Andrea Belometti and Doriano Vavassori on a Fiat 508C of 1937, which joins the third place won in Verona three weeks ago, a race in which Luca Patron had done very well, finishing fifth. The driver from Bergamo paid 69.77 points behind the winners and preceded two other drivers from Bergamo, Vincenzo Bertoli and Alberto Gamba, in a 1966 Lancia Fulvia Coupé, first placed among the cars built after the war. Excellent sixth place and success in the under-30 category for the young sons of art Nicola Barcella and Marco Salvinelli in a 1979 A112 Abarth, with which they preceded by a whisker Ezio Sala and Gianluca Cioffi on a 1937 Lancia Aprilia. In the final part of the top ten, as mentioned, we find only pre-war cars, namely the 1927 Bugatti 37A of Matteo Belotti and Ingrid Plebani, eighth, the 1930 Fiat 514 MM of Alessandro Gamberini and Elena Fanciroli, ninth, and the 1934 Fiat 508S Balilla of Osvaldo Peli and Nicola Donà.

As for the groupings, whose classifications are compiled without considering the multiplication coefficients and therefore can change the positions of the overall, Gamberini and Falciroli won in RC1, Barcella and Ghidotti in RC2, Bertoli and Gamba in RC3, Barcella and Salvinelli junior in RC4, Malucelli and Bernuzzi (Fiat Duna of 1989) in RC5. The women's classification awarded Federica Bignetti and Luisa Ciatti in an Alfa Romeo Giulietta from 1960, while as far as the associations are concerned, success went to Amams Tazio Nuvolari, ahead of Scuderia Nettuno and Classic Team. The last prize, the work of art created by Luisa Bifulco, went to winners Guido Barcella and Ombretta Ghidotti, for the best placing of their pre-war car.
A lot of curiosity and interest was also aroused by the "Power stage" challenge, a race within a race sponsored by ACI Storico, Peli Porte Sezionali and Trentino Marketing, which brought all the competitors to challenge each other, one after the other, on three pressostats located in the historic centre of Ala, won by Andrea Vesco and Fabio Salvinelli, an initiative that marks the start of a collaboration between the Adige Sport team and the municipal administration, which will be enhanced next year on the occasion of the 30th anniversary edition. The "Power stage" can be seen on the AcisportTV Sky 228 television channel next Thursday (3 March) from 9pm and in streaming on the website www.acisport.it.