Behind the driver from Veneto are Walter Modonutti and Giampietro Ceschi. 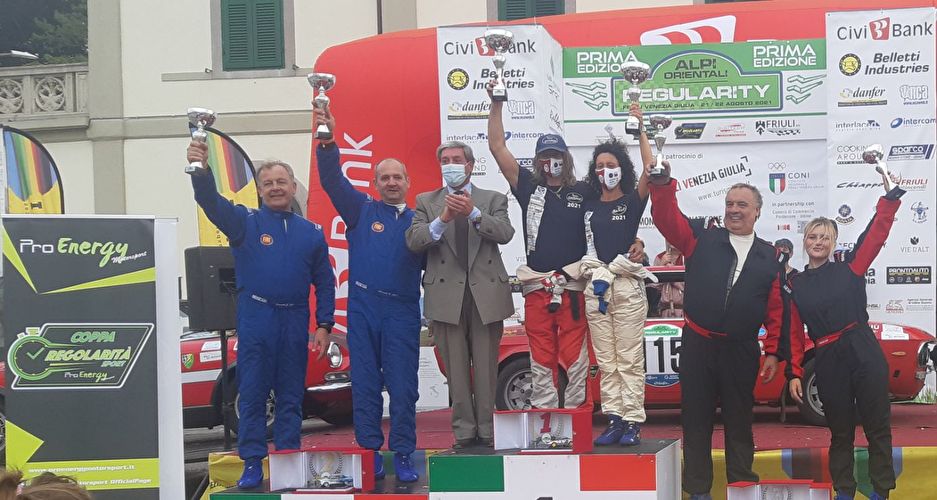 Pro Energy Motorsport, organiser of the COPPA REGOLARITA' SPORT Pro Energy, successfully closed the trip to Friuli, where the 1st edition of the Alpi Orientali Regularity Rally was held. The classification of the race, where the crews entered in the COPPA REGOLARITA' SPORT Pro Energy represented a large number, equal to 33% of the starters, saw the victory of the specialist Andrea Giacoppo with the Lancia Fulvia 1.6 HF that preceded the local driver Walter Modonutti, with the Fiat 124 and at his first participation in the Cup in 2021. The podium was completed by Giampietro Ceschi with the Opel Manta B GTE. The classification leader Luca Monti, was forced to retire due to a broken throttle wire when he was in second position of the COPPA REGOLARITA' SPORT Pro Energy. This does not prevent him from confirming his leadership in the general classification, which he leads with 8 points over Alessandro Zanini, who was also forced to retire in Friuli after the first time trial. The race was dominated by Giacoppo, who, thanks to the 1.5 coefficient of the race, despite having only one presence, climbs up to fourth place in the general classification. At the end of the season there are two races left: the Regolarità Sport Infinity and the Revival Rally Club Valpantena, both scheduled in November. "I really enjoyed myself, commented Giacoppo at the end of the race. A nice course with long and driven special stages. I had never raced on these really challenging roads". Among the navigators, the victory went to Cristian Adami who comes closer to the leader, since the beginning of the Cup, Roberta Bellerio, bringing him to only 2.5 points. The regularity proposal made by the organisers from Friuli was appreciated by the participants. Being behind only the historic cars avoided time losses due to the suspension of special stages, which are the order of the day when modern cars are present. The times set were demanding and did not allow any mistakes to be made. The race had no "dead" times, the minutes of intervention provided at the service parks did not tire the regulars who do not assist, the rearrangements with limited time than usual were the weapons victorious recognized by the competitors to the organizers. Also the location of the scrutineering far from the centre of Cividale, as well as the beautiful setting of the awards ceremony held instead in Cividale del Friuli have helped to satisfy the participants. "The prize-giving ceremony," commented Emanuele Bosco, president of Pro Energy Motorsport, "was also enriched by the prizes provided by Digitech Timing, which, with the presence of its Managing Director Marcello Cioli, made it possible to hold a prize-giving ceremony in grand style. We can say that the places crossed were really beautiful and that the organiser wanted to reserve a day dedicated exclusively to historic cars and a prize-giving ceremony on the grand stage". In short, an appointment to be repeated in 2022.