Pandemic does not stop tricolour regularity, 114 crews did battle in the first CIREAS race 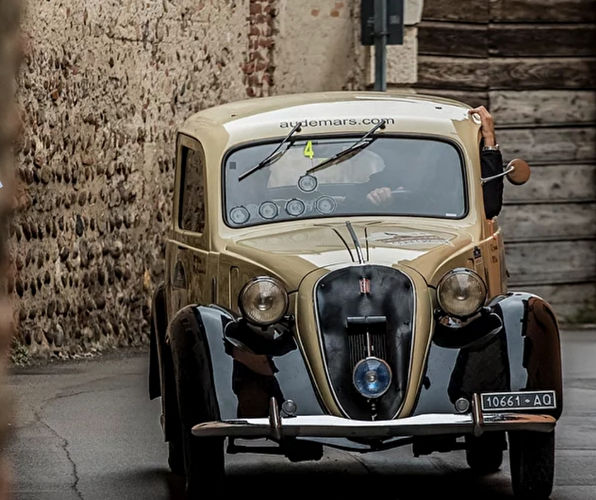 The Coppa Giulietta e Romeo, organised by Aci Verona in collaboration with A.C. Verona Historic, Aci Verona Sport and Aci Storico, opened the Italian classic regularity car championship. A good 114 crews put their trust in the organisation, perfect in respecting the Aci-sport protocol for the current pandemic situation. Qualifying the event was the 45 top drivers and a fleet of 14 pre-war cars. The 184-kilometre route took place in the plains, hills, lake and mountains, with 64 different time trials. The idea of organising the Chrono Ability Training on Friday afternoon, before scrutineering, was a good one: a chance to try out the bike freely before the start of the race. With a view to the environment, each crew was given the protective paper to put under the car during the stops of particular value to prevent oil leaks could remain on the asphalt. Finally, the lunch box at the Aquardens Terme thermal centre for the lunch break was very well organised. The icing on the cake was the personalised certificate of participation given to each participant.

Victory for the Scapolo brothers, but for the Cireas...watch out for Crugnola-Vida.
The overall victory went to the brothers Alberto and Giuseppe Scapolo from Veneto, on Fiat 508, who preceded Roberto Crugnola-Marco Vida from Varese, with a similar car, and the couple from Bergamo, in life as in the race, Guido Barcella-Ombretta Ghidotti with Porsche 356 C. After a quiet start (13th after the first seven stages), Scapolo took the lead at the 15th stage and never left it. The duo Andrea Belometti-Caterina Vagliani in a Fiat 508 C took the opposite route: after occupying the first position for 14 stages they slowly slipped to 6th place. Among the top five crews also Fontanella-Malta on a Lancia Aprilia and Alberto Aliverti-Giacomo Lamperti with another Fiat 508. From seventh to 10th place were father and son Alberto and Federico Riboldi in a Fiat 508, who preceded Sergio Sisti-Anna Gualandi in a Lancia Aprilia, Luca Patron-Steve Clark in a Renault R5 Turbo and Marco Gaggioli-Andrea Pierini also in a Fiat 508 C. Absent for different reasons the first three crews in the Italian championship 2020: Lorenzo and Mario Turelli son and father; Franco Spagnoli-Roberto Rossoni, and Massino Zanasi-Barbara Bertini, all three expected at the next Coppa della Pace race on 26-27 February.

Scarioni and Pietropaolo, among the ladies we start from them.
The coveted ladies' cup, with a record five crews at the start, saw the head-to-head between the duo of Gabriella Scarioni-Ornella Pietropaolo with their 1982 Austin Mini, who in the end beat Federica Bignetti-Luisa Ciatti by four hundredths, with the older A.R. Giulietta spider fast 1960. A prestigious third place went to the new crew Rossella Torri-Giovanna Ruffini in a 1969 Mini Cooper Mk2, who took on the race with a view to preparing for the National Regularity Trophy. The Under 30 classification went to Roberto-Andrea Paradisi with the 1980 Fiat 127, who preceded Andrea Ronzoni-Greta Personeni with the 1956 Fiat 1100, winners of the TNR last year and Nicolò Mion-Alessandra Baldovino with the 1969 Fiat Campagnolo AR59.

Many teams are competing, but the most precise is the Classic Team.
Among the 11 registered teams, victory for the reigning champion Classic Team, which preceded Brescia Corse and Nettuno. Fourth the multi-titled F.M. Franciacorta Motori and in fifth place the Lumezzano-based Emmebi 70.
The special classification of the Nicolis Trophy, calculated only on the actual penalties achieved, still sees the Scapolo brothers in first position, followed by Patron-Clark, Barcella-Ghidotti, Crugnola-Vida, Fontanella-Malta, Vincenzi-Gamba, Aliverti-Lamperti, Seneci-Bonera, Belometti-Vagliani and Riboldi-Riboldi.

Italian Championship, Categories reward net penalties.
From 2019 Aci sport has introduced the classification of the Categories that group cars in a different way and that is drawn up by taking the actual penalties without the coefficient of seniority of the car. A novelty much appreciated by the participants in the races. Obviously, in the top positions of the various categories we find some of the names already mentioned.

In RC2, for cars built from 1931 to 1950, the podium is made up of Scapolo, Crugnola-Vida and Fontanella-Malta. Then there are Aliverti-Lamperti, Belometti-Vagliani and Riboldi-Riboldi.
In the RC3 for cars built between 1951 and 1969 victory went to Barcella-Ghidotti who preceded their fellow countrymen Vincenzo Bertoli-Alberto Gamba in a 1966 Lancia Fulvia and Riccardo Roversi-Michele Bellini in a 1954 Fiat 1100. The father and son duo Fabio and Marco Salvinelli missed out at the end, forced to retire due to a mechanical problem when they were in 13th position overall.
RC4 went to Angelo Tobia Seneci-Emanuele Bonera from Brescia, with the 1973 Innocenti Mini Cooper 1300 Export, followed by Massimo Politi-Pierluigi Ruggeri with the 1970 Innocenti Mini Cooper Mk3 and the stainless and always among the best Armando Fontana with Silvia Grossi and the 1972 A11.
Finally, the RC5 went to the duo Patron-Clark who preceded Andrea Malucelli-Monica Bernuzzi, with the 1989 Fiat Duna and Stefano Pasinato, back to racing after a sabbatical, navigated by Giovanni Onorati with A112 Elite 1982.

The run-up to the 2021 Group Cups has begun
The second grouping among the 14 registered cars built between 1931 and 1946 behind Scapolo, Crugnola and Fontanella offers among the 14 participants Aliverti, Belometti and Alberto Riboldi. In 10th place was the Mille Miglia champion Giuliano Cane with Giovanna Gallini in a Lancia Aprilia.
In the third grouping with 17 cars for the wide range that includes vehicles from 1947 to 1961 after Roversi-Bellini we find Alessandro Gamberini-Elena Falciroli with the Fiat 1100/103 of 1955 that preceded the already mentioned Ronzoni-Personeni, Bignetti Bignetti- Ciatti, while in fifth place with the Fiat 1100 103 of 1954, we find the crew of Scuderia del Grifone of Alessandro Alderighi- Stefania Lo Presti.
The fourth group, with 13 participants, sees behind Barcella, Bertoli, Roversi and Gamberini the Bergamasque Sergio Mazzoleni-Edrisio Carrara with the Porsche 356 Sl of 1963, the bearers of the "Amams Tazio Nuvolari" Alfonso Facchini-Luigia Olivetti with the not easy MGA Roadster of 1956 and Domenico Gianotti-Antonella Zanotti, bearers of the Emmebi 70 team of Lumezzane, with the Porsche 356 AT1 of 1957.
The fifth group with 19 starters saw Bertoli-Gamba and Politi-Ruggeri on the podium, as well as the expert duo formed by Amedeo Ciccuttini-Lia Castellano on the beautiful 1970 Alfa Romeo Giulia Ti. Just outside the podium the new father Michele Lafortezza, who raced for the first time with Luca Bordogna and the 1969 Innocenti Mini Cooper with the colours of F.M. Franciacorta Motori and Massimo Dell'Acqua - Mariarosa Vicari also specialists in the specialty of regularity to medium, with the Fiat 850 Coupe of 1970 and Giovanni Pedrali-Bruno Fianrdi with the beautiful MGB of 1968.
The sixth group was the largest with 27 crews, with Seneci-Bonera winning and Fontana-Grossi coming second, with Gabriele Tonarelli-Daniela Della Croce from Tuscany on the third step of the podium in their A112 Elegant, driven by the Kinzica team. Behind them the local duo made up of the evergreen Paolo Salvetti with Bruno Spozio and the A112 Abarth 58 HP; with similar car the brothers Sergio and Romano Bacci. Behind them last year's RC4 champions Claudio Lastri -Valter Pantani with an A.R. Giulia Nuova of 1975. Following, a little less than usual, Rimondi-Fava with the 1974 Porsche 911 S Targa and Marcello Gibertini-Lisa Sighinolfi with the 1974 Lancia Fulvia Montecarlo.
The seventh group with 8 participants saw the victory of the top driver Andrea Giacoppo with Nicola Randon with A112 Abarth 70 Hp of 1979 ahead of Giuseppe Nobis and Gianluca Caneo with similar car and same year, and the excellent driver Barbara Zazzeri navigated as usual by her husband Cristiano Androvandi on board of the Renault 5 Alpine of 1981.
The eighth group with 9 competitors sees, behind Patron-Clark and Pasinato-Onorati, the RC5 champion and eighth group 2021 Gianpaolo Limoni Scaglia, navigated by Paolo Frassine on A112 Elite of 1984. The already mentioned Scarioni-Pietropaolo and Giovanni Gualtieri-Alessio Morosi with A112 Junior of 1984.
Ninth and last grouping with 5 participants for Malucelli-Bernuzzi, followed by Roberto Ricci-Natascia Biancolin with Alfa 33 1.3 of 1986 and Marco Gandino-Danilo Scarcella with the beautiful Lancia Delta Integrale of 1989 in livery Totip, returned after a few years in the classic regularity after many podiums in the regularity to Media and the 2021 season in the sport with the colours of the Grifone team.

Last classified female crew...never lose heart
Finally, we close with a mention of the last classified crew, the female one composed of Giovanna Giulia Maria Meruzzi and Emanuela Marcolini, with the 1959 Alfa Romeo Giulietta Spider, remember.

--> Here you can find the rankings of the Giulietta & Romeo Cup