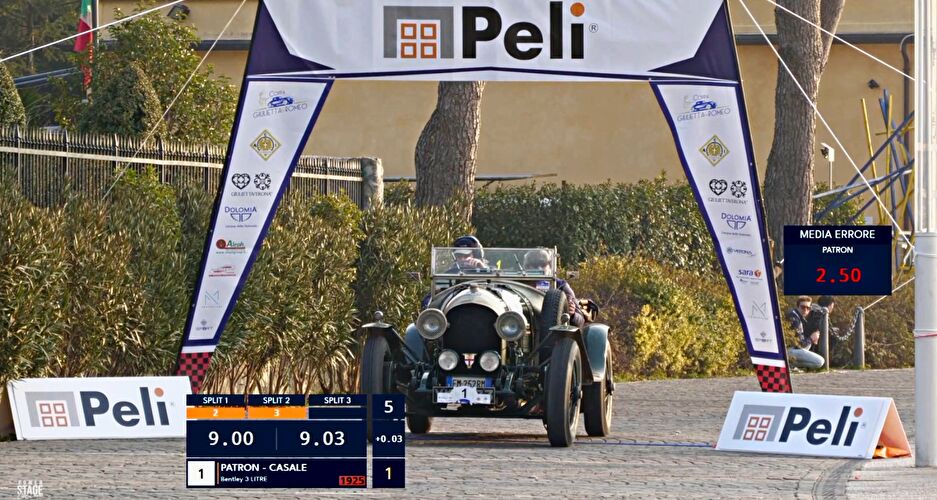 The lakeside of Bardolino was the setting for the first ACI Storico Power Stage Classic 2022, the new format dedicated to classic regularity racing for historic cars, the main aim of which is to promote the speciality through television channels and online platforms.

Tomorrow Thursday, February 10 at 21.00 is scheduled the first airing on ACI Sport TV channel 228 of the Sky satellite platform.

Thanks to an innovative television graphic dedicated to the timing, the passage of each crew will be exciting for the spectator, keeping the suspense high until the last detection, as it happened on the Veronese shore of Lake Garda.

An exciting challenge on the edge of the hundredths, which will take place at the end of the main regularity race to which it is combined. Last weekend it was the 2022 edition of the Coppa Giulietta & Romeo, the opening race of the Italian Historic Car Regularity Championship, which accompanied the over one hundred crews on their discovery of the new ACI Storico Power Stage Classic.

The format includes three concatenated time trials, which are called SPLIT. Each session has a time limit that competitors must adhere to. For every hundredth of a second of advance or delay, participants will receive a penalty point up to a maximum of 300 points, equivalent to three seconds of advance or delay. The total of the three splits is always less than a minute, to allow everyone to give an interview at the end of the stage.

The first edition saw the local crew made up of Pierluigi and Maurizio Pocobelli in a 1981 BMW 323 (Scuderia A.C. Verona Historic) take the top step on the podium with only 4 penalties in total. The duo of the Bavarian car, last to descend in the arena of Bardolino, took the victory despite the scarcity of light present. In second place, after holding the leadership for a long time, were Giuseppe Rapisarda and Danilo Piga in a Morris Mini Minor MK1 (Scuderia Nettuno Bologna), with 5 penalties.
Closing the podium were Maurizio Magnoni and Marisa Vanoni from Varese in a 1962 Porsche 356 B (Registro Italiano Porsche 356).

Among the various categories, in RC1 success went to Luca Patron navigated by Massimo Danilo Casale, on board the much admired 1925 Bentley 3 Litre (8 penalties). Alberto and Federico Riboldi in a 1937 Fiat 508C (Scuderia FM Franciacorta Motori) won RC2 with a total of 8 penalties.

The top two crews in the overall classification also dominated their respective categories. Rapisarda and Piga in RC3 and Pierluigi and Maurizio Pocobelli in RC4. RC5 saw the victory of Fabio Loperfido and Alessandro Moretti on an Autobianchi A112 Abarth 1982 with 6 penalties.

The Ladies Cup was won by the "pink" crew formed by Rossella Torri and Federica Bignetti Bignetti, on board the 1969 Innocenti Mini Cooper MK II.

Among the teams, the Italian champions of the Scuderia Nettuno dominated, finishing with 19 penalties. Second place for Scuderia A.C. Verona Historic with 29 penalties, preceding Scuderia Brescia Corse by only 2 hundredths.

All the classifications can be consulted on the website Regolink.com, the portal dedicated to regularity and partner of the initiative.

The next appointment is scheduled for 26 February in Ala, after the Coppa Città della Pace, the second round of the tricolour series. Translated with www.DeepL.com/Translator (free version)